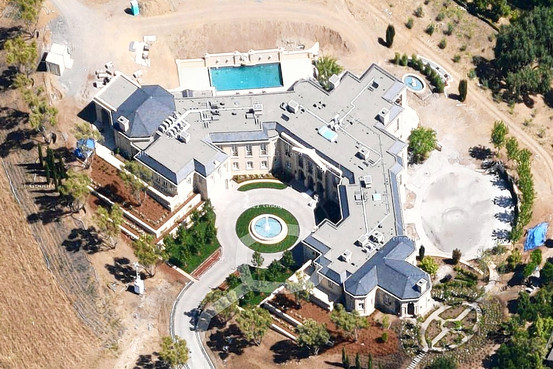 A Russian investor paid $100 million for a 25,500-square-foot home in Los Altos Hills, Calif., which marks the highest price paid for a single-family home in the U.S.

Billionaire Yuri Milner, 49, who heads Digital Sky Technologies and whose investments include Facebook Inc., Groupon Inc., and Zynga Inc., has no immediate plans to move into the French chateau-style mansion and has a primary residence in Moscow.

The $100-million home features views of the San Francisco Bay, indoor and outdoor pools, a ballroom, and a wine cellar.

The high-price purchase is another sign in the growing strength of the luxury real estate market. Sales volume of homes more than $1 million increased nearly 4 percent in February year over year, the National Association of Last week, one of our senior closers approached me with a situation that caused some delay in closing a purchase transaction. The problem stemmed from a Feb. 2011 change in reporting on OSS (on site sewage) in which a real estate broker had omitted details on the property of an on site sewer (septic tank).  The transaction went sailing along until a look at the title report revealed the presence of a septic system. Our closer scrambled to get the needed documentation, inspection reports, and notice 22-U for the buyers, but King County announced it had changed its reporting requirements to Home buyers and -sellers alike often bristle with anticipatory irritation at the mere thought of all the paperwork they expect they’ll have to come up with to do their transaction, above and beyond the basic loan application, contract, disclosures and closing docs. And these worries start way in advance; it’s as though, before they even start visiting open houses, buyers begin to visualize - and dread - spending hours upon hours in the dank catacombs of the Vatican (à la Da Vinci Code) combing through ancient files, seeking some rare and precious artifact documenting their childhood dental history or genealogy.

In some respects, this vision of the experience of obtaining a home loan might not be far off - there are oodles of hoops through which to jump

Putle Homes invited The Cascade Team Real Estate out today for an informational meeting along with lunch. They are well underway in building 600 new homes at Snoqualmie Ridge.

Pulte has picked up several of the existing Murray Franklin home plans along with adding some brand new floor plans over the next few months that have never been seen before. In addition, they have raised the bar on the traditional offering level.... All of the homes (Including the Cottage Series) will have Slab Granite counters, under mount sinks, and extended hardwood floors from the front door on back through the kitchen. Also, instead of just one standard type of wood floor, home buyers can visit the design center in Kirkland and choose from up to a dozen woods, and I would like to welcome Rachel Dinunzio to The Cascade Team. Rachel lives down in the south Sound area in Puyallup. We have had numerous brokers ask if we have anyone down in this area over the past year, so I am happy to say we now do. Rachel is happily accepting referrals. She will also be working hard to establish a good presence for The Cascade Team in this area and to recruit more agents.

Read Full Post
More people signed contracts to buy homes in February, but sales were uneven across country.  Pending home sales increased in February, but not without notable regional variations, according to the National Association of Realtors. More Americans signed purchase and sale contracts to buy a home in February, but overall sales were uneven across the country, and not enough to signal a rebound in the housing market.  Purchase and sale agreements for homes rose 2.1 percent last month to a reading of 90.8, according to the National Association of Realtors' pending home sales index released Monday. Sales rose in every region but in the Northeast.

Signings were 19.6 percent above June's index reading, the low point since the housing bust. However, the index The start of spring usually brings a surge in existing-home sales and housing starts.

But this year, warming temperatures may not be enough to pull the real estate market out of a deep freeze. New homes sales plunged 16.9 percent last month, while the median price slid nearly 14 percent to $202,100, the lowest level since December 2003, according to the Commerce Department.

Rather than buy homes, growing numbers of Americans are renting apartments and houses. The Census Bureau says the national rental vacancy rate for the fourth quarter of 2010 was 9.4 percent, a significant

As you have probably already heard, T-Mobile’s parent company Deutsche Telecom, located in Germany, will be selling T-Mobile USA to AT&T for $39B.

While I am neither a T-Mobile, nor an AT&T customer, I am in the real estate business and am concerned about what this might mean for loss of jobs and further hits against the local Seattle real estate and housing market.

Considering the size of the T-Mobile headquarters in the Factoria area of Bellevue, it would appear there are a lot of good jobs that are going to be affected by this acquisition, and the number of layoffs that may ensue could be huge.  As a large local employer for years, T-Mobile's workforce no doubt owns and purchases homes in the Greater Seattle Area, and with the loss of jobs and the With over 3,000 active listings in Seattle proper and a tough market, it's still always fun to take a look at the homes listed at the top end of the pricing pyramid. Today's featured city is Seattle. Click HERE to view all listings (Most Expensive First) WASHINGTON (AP) - Fewer Americans bought previously occupied homes in February and those who did purchased them at steep discounts. The weak sales and rise in foreclosures pushed home prices down to their lowest level in nearly 9 years.

The National Association of Realtors said Monday that sales of previously occupied homes fell last month to a seasonally adjusted annual rate of 4.88 million. That's down 9.6 percent from 5.4 million in January. The pace is far below the 6 million homes a year that economists say represents a healthy market.

Nearly 40 percent of the sales last month were either foreclosures or short sales, when the seller accepts less than they owe on the mortgage.

One-third of all sales